Catherine is in England seeking the downfall of Mary. Turning to her enemy Elizabeth is dangerous, if the plan fails it potentially leaves her at the mercy of two angry queens. Neither woman wish to be involved in an assassination plot. Killing one queen leaves a bad taste in your mouth and opens the door to your own enemies deciding killing you is a good idea to kill monarchy putting themselves in danger.

Instead Catherine and Elizabeth set out to stain Mary’s reputation in the eyes of the Vatican. Isolating Mary from her catholic allies and source of funds would leave her in a fragile position. Importantly it would diminish Mary’s threat to Elizabeth’s throne. 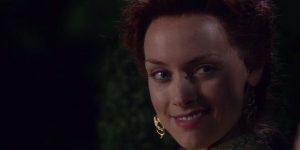 Francis is living life to the fullest. Leaving court business aside all he wishes to do is build a boat and enjoy time with his wife. Mary oh the other hand is all too aware if the fragile state of affairs back in Scotland and can not let go of her burdens too easily. Catholic allies in Scotland are abandoning Mary’s cause allowing for the spread of the protestant religion in Scotland. Mary needs more support on the ground in Scotland but France has no more men to give.

Desperate to solve the Scotland problem Mary turns to visiting pirates. A successful and good looking pirate Martin de Lambert ( Saamer Usmani) is at French court along with his pet tiger looking to woo a new wife. The rugged looking pirate catches the eye Greer and sensing how important the union could be beneficial to Scotland Greer agrees to spend time with Martin. Quickly Greer agrees to his engagement and the pirate woos Greer with his smooth tongue. As it turns out the pirate has no intention of marrying anyone but has been enjoying testing all the merchandise including Greer.

Whilst Martin has no intention to marry Greer he is an honest man and will send his men to Scotland to aid Mary.

After being exiled from French court Catherine heads to England to seek Elizabeth’s support in bringing down Mary. Before hightailing it across the North Sea Catherine cleverly sets up a decoy in France. No one will expect her to be plotting if she is seen going about her daily life in France.

Catherine suggests destroying Mary’s reputation by detailing to the Vatican Mary’s affair with Condé. She has brought with her a group of witnesses and has them deployed on route to the Vatican.

Elizabeth’s privy council are not keen on her involvement in Scotland’s issues. Dealing with Mary, Queens of Scots comes much further down the to do list in the eyes of Elizabeth’s nobles. To them Elizabeth finding a suitable husband and bearing a male heir is a far more pressing issue. Elizabeth is not keen on taking a husband and giving away her power to a man.

Catherine offers a solution in the form of her son Prince Charles. Marrying the young royal will provide Elizabeth with support but importantly her freedom. Charles is a child and there would be years yet before Elizabeth would be expected to provide an heir with Charles. Until then Charles would remain in France and Elizabeth would be free to pursue her love with Robert Dudley. There love is forbidden and marriage between the two is off the cards. Robert already has a wife Amy, aware of the illicit relationship Dudley and the Queen share Amy is not too keen on Elizabeth. Both have reputations to protect but the heart desires what is desires.

Elizabeth sends a letter to Mary and Francis seeking permission to marry Prince Charles. The marriage would broker truce between England and Scotland however Francis drops a bombshell. His health is failing and soon he will be unable to protect Mary. Once Charles is King the truce would be broke. Francis promises to try and protect Mary whilst he can.

Back to Catherine’s decoy, the plan unravels when the decoys boyfriend is killed in a tragic sex related injury. Unable to cope the decoy kills herself. When news that Catherine de Medici has killed herself out of guilt reaches French court the plot is uncovered. Neither Mary not Francis believe Catherine would kill herself due to a lover’s death. When later Narcisse learns of a French delegation being assassinated in Rome on route to the Vatican to out Mary’s love affair with Prince Condé It becomes clear it is Catherine behind the plot.

Narcisse wishes to formally court Lola. Francis denies his request. He has not only Lola to think of but that of his son, John. Regardless Narcisse continues to try and woo Lola and Lola returns Narcisse’s bath related wooing.

Whilst Elizabeth waits for Mary and Prince Charles on the cliffs at Dover it quickly becomes apparent that she has been tricked. Whilst Elizabeth is at the coast awaiting the French her palace is unguarded. The French have come to reclaim Catherine. 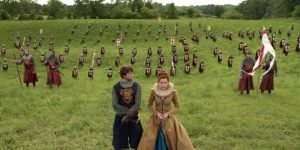 Whilst Elizabeth receives a stern lecture from her privy council she instead decides on focusing on taking out her frustration on a live struck Dudley. The Virgin Queen she may be known as, a virgin she does not act behind closed doors.

Catherine, her plot to undermine Mary discovered is trapped in a corner. Mary has the Queen Mother thrown into one of the pirate’s cages, Catherine’s new cellmate is no other than Martin’s pet tiger.

In other news Bash continues with his Poirot impersonation. The binding spell seems to be a success. Bash can feel Delphine’s feelings and pain and has nasty rope burns around his wrists. Bidding his men to find Delphine under the guise of her being a criminal Bash is surprised by her appearing in his bedroom. She pleads her innocence and states the killer will strike again.