The Reign season premier returned with a strongly paced teaser of the action packed season we are to expect ahead of us.

Firstly I wanted to remind people I’m a self confessed history nerd, I’m currently doing my MA in Museum Studies, the Tudor period in particular is my safe haven of history. Aside from that Elizabeth is a badass, so no apologies for bias there.

Reign has always taken history with a pinch of salt, major historic events may be discussed within these recaps. If you don’t want to know Mary is going to lose her head stop reading now….

I’m conflicted as I adore Adelaide Kane and her portrayal of Mary, who in the show is a lot more bright than history would have us believe. History however wins…

As the line goes from the Lumineers ‘Scotland’. She’s in control of everyone and everything.

Season four opens with three queens all battling for control of their own destiny and control, all too aware of the danger that brings.

In Scotland Mary is relieved to see her last remaining lady Greer, why a madam is allowed at court seems to go ignored.

There is the sombre matter of Lola’s funeral to be taken care of. LolaBeth is so 2016 and both Elizabeth and Mary are dealing with the fallout of Lola’s demise. Mary thinks Elizabeth killed Lola to get at her and Elizabeth believes Mary ordered her death.

Poor John is orphaned and still in the hands of the world’s richest nanny, turns out an arrow to the back is better than hearing yet another sermon from John Knox.

Who surprise surprise is still wriggling himself into Scottish court. With snakes in the grass it is no wonder Mary is unsure who she can trust. Knox hates her because she is Catholic and James is surely not too keen to give up the throne to his long absent sister.

When catholic mass literally knocks Mary out she is seemingly transported to the ‘north’.  Now I get Scotland is a lot smaller than Canada but unless her royal horses can fly you have to ask just how far she got kidnapped.

Waking up from her little nap it turns out her catholic ‘friends’ have decided that Mary is spending too much time with protestants at court and have taken it upon themselves to fix the issue.

Their oh so clever scheme…Kidnap the Queen and blackmail her into marrying a rather weak looking heir to a catholic clan. Mary is not so keen on the plan but does change into a stunning cream dress. Using her well practiced feminine charm the poor groom to be stood no chance and Mary uses the lads fainting to make a hasty retreat.

Meanwhile in Edinburgh, Greer alerts a rather distracted James that Mary had been kidnapped. Dragging himself from the two ladies in his bed he sets out to rescue his sister with the help of a short cut from John Knox.

Riding to Mary’s rescue their are interrupted by Mary herself astride a horse and not requiring any male assistance in her rescue. Score one for independent women. Girl power 16th style.

James is adamant he will ride ahead and massacre all those involved in Mary’s abduction. Knowing all those deaths won’t do her popularity rating any good Mary had other plans.  She will offer the clan leader redemption if he will swear loyalty to Mary and offer his sincere apologies.

Begging is not in the clan leaders vocabulary and it leaves Mary with few options. Not keen on killing a fellow catholic she ‘requests’ James prove his loyalty to her by playing the role of executioner. One headless clan leader later the rest of the villagers are all too happy comply, long live Queen Mary.

Meanwhile in England Elizabeth is still vexed at Mary’s attempt on her life, Gideon is convinced Mary is innocent however this doesn’t please his queen.

Lord Darnley( Will Kempt), is dodging Elizabeth’s letters ‘inviting’ him to court. She has wind of his intention to marry Mary and Elizabeth is less than pleased. Whilst his mother makes excuses Elizabeth makes herself clear, either Darnley comes to court or she will have him dragged their on his knees.

If obedience to Elizabeth was an exam, Gideon is on course for an f. Despite being given clear instruction to leave Narcisse to rot in his five star cell in the Tower of London, Gideon instead visits him instead. Narcisse is understandably not a fan of Elizabeth however their conversation turns to who was behind the assassination attempt and realising Lola was tricked Narcisse begs Gideon to find John and ensure the child is safe.

Tracking the nanny down she’s not too keen at being found and threatens Gideon with a knife whilst poor John wonders where his life went so wrong. Unwilling to talk for fear of reprisals on her family the nanny none the less gives Gideon the information he needs, there are few men with that much power and ill will towards both Mary and Elizabeth.

Elizabeth is none to pleased that Gideon went against her wishes however the news that her cousin wasn’t behind the attack provides short comfort. Things are looking up for Narcisse when Elizabeth gives him freedom to arrange his travel back to France.

In Scotland Mary receives Gideon’s intelligence and confronts her brother with the knowledge, of course James knew and Mary is less than impressed that he kept it from her. As for Elizabeth, whilst feeling Lola’s loss greatly Mary must admit she would have done the same. An attack on the life of a monarch can not go unpunished.

John Knox will get his,just not today.

For Mary though this latest trial has only persuaded her further of one thing, she must marry. A strong man, with a good claim of his own to the English court and influence to boost, Lord Darnley will do well for a second husband.

All too aware of Mary’s intentions Elizabeth had finally summoned Lord Darnley to court, not wasting any time they both lay out their cards. Lord Darnley is willing to desist in his courting of Mary if Elizabeth will break the engagement of the woman he truly wishes to marry. Not keen on the expense to her purse, Elizabeth is none the less willing to sabotage Mary’s plans of marriage. 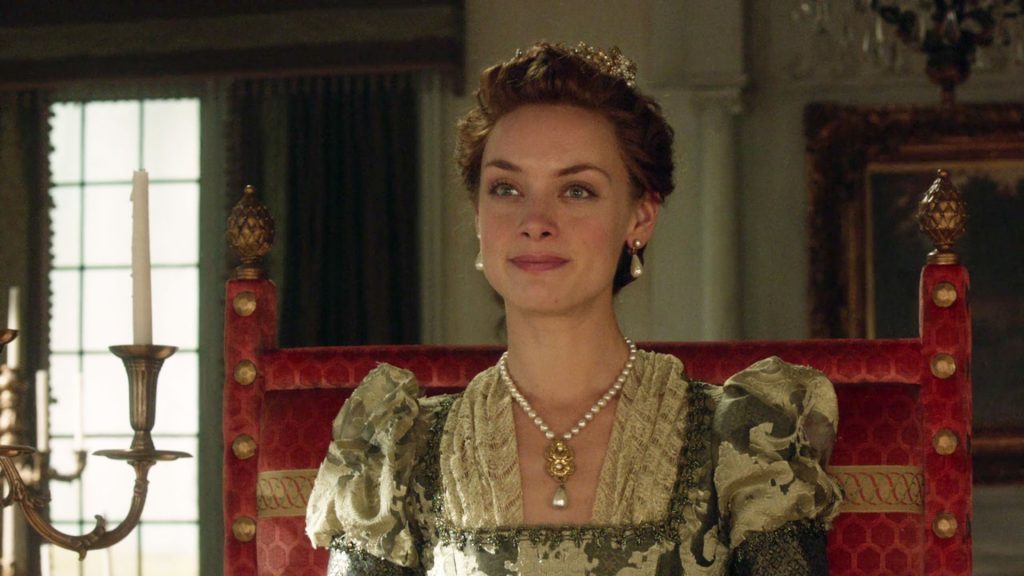 In France, Princess Leesa is at court and doing her best to arrange the marriage of her sister Claude to Martel De Guise. Claude is not keen at all and loudly makes her opinion heard, she will marry Leith if and when the writers decide to tell us he isn’t dead.

Martel De Guise of course wants Claude to give up on her dreams of her happy reunion with Leith, he provides her with ‘proof’ of his death via a few torn up love letters. Unbeknownst to him the letters are old and Claude isn’t as stupid as the punk dresses might apply.

Grabbing a knife Claude is on mission to make the carpets a little bloody when Catherine intercede, Claude has a lot to learn about murder.

Later that night Catherine takes a nice walk with Claude, well maybe not so nice since Martel De Guise decides to take a short fall from a balcony.  Such a shame for the De Guise family to have to deal with a shameful suicide. Leesa isn’t at all convinced and decides she is remaining at court.

This episode mentioned Leesa is Don Carlos’ stepmother and seems to be inferring she is Queen Consort to Spain, this is confusing as Princess Elizabeth marries King Philip of Spain in the Reign pilot and Catherine’s youngest daughter should be just a child.

Whether the writers forgot which daughter is which is possible. Answers on a postcard please.

Through this season I will be donating £5 to the Nyantende Foundation everyone Mary or any of the Queens say anything along the lines of ‘I’m the Queen’s. This episode put £10 in the pot, donation will be made during the Reign finale.