Two innocent children playing in the forest…Whatever could go wrong?

As it turns out Charles needs to take some courtship lessons alongside Prince Magnus of Denmark.  Poor Bianca fled from Charles when his idea of showing her a good time included corpses. Try flowers next time Charles!

Charles has taken to his bed looking more and more like a emo reject daily.

Meanwhile Leesa continues to be the courts pain in the ass. Claude is sleeping with a married man and her interfering good for nothing sister can’t keep her nose out of it.

Church officials bursting in whilst your having sex you’ll probably regret is the last thing Claude needed. Now with the church involved Claude is to sent to a nunnery.

Honestly give Leesa a hug, tell her her she is lived and kick her ass back to Spain.  Despite being happily married she has a stick up her ass.

Narcisse offers to intervene. It is clear that Leesa will not hear her mother’s words.

Leesa only offers one option, marry or go to the nunnery.

Cue the arrival of Narcisse’s son Luc (Steve Lund), how many children does he have hidden away?

He actually doesn’t seem too bad, of course Claude is wary. Who wouldn’t be?

Catherine offers Claude advice, she may not be able to rescue her from a nunnery but she is to wed she can always help make her a widow. As someone with a wedding three months away this tickles me too much.

The flowers during the marriage of Claude and Luc were a flashback to Mary and Francis’ wedding way back when.

Luc is so tender and nice, honestly one has to wonder if he truly is Narcisse is wed.

Leith returns to the castle shortly before Claude and Luc consummate their marriage.  Narcisse shows his true colours when he has Leith taken away by guards, power once again too tempting.

Wandering the halls Charles, his face stained with blood appears to have taken his emo phase to new extremes. Pushing his mother to the floor may also not be too wise. His erratic behaviour is a threat to the entire family.

In Scotland Mary is taking a holiday. I’m not sure Queens really get holidays but we will roll with that.

As it turns out the holiday is a ruse to give Mary and Greer some good old bonding time. Oh look did you remember Mary has a dog?

Seriously a special mention has to go to Adelaide Kane. Trooping through the filming despite a migraine.

A note on Darnley, historically he was a bit of a dickhead.

In the show like many things they blur the edges.

The marriage of Mary and Henry Stuart, Lord Darnley was not one of love, they mostly weren’t. It was of convenience and about strengthening positions.

His arrogance and headstrong approach we see now is only the tip of the iceberg.

James continues wooing Emily Knox, Emily seeks his touch ( who wouldn’t married to Knox) but is riddled with guilt.

If only Emily knew James is spying on his sister’s behalf. Catching wind of Knox’s next sermon gives Mary a chance to stop Knox spreading more hate and gossip.

Mary interrupts Knox’s sermon with food for the village. The villagers are overjoyed after a failed harvest but Knox not so much, he has a follower start a fire. A little extreme Knox, a little extreme.

Whilst Knox rides away Mary is keen to help stop the fire, gathering water from the well. It also seemed like a good plot ploy together James to rip his top off.

With the fire out the villagers cheer for Mary, plan backfire a bit Knox?

Just as everyone relaxed another house goes up in flames with a small child inside. Luckily for him Darnley is to the rescue.

Darnley and Mary agree on terms to marry. When they said this season of Reign was going to be fast paced they were not kidding.

In her chambers Mary finds a note claiming that Darnley set the second fire to make himself appear a hero and impress Mary. 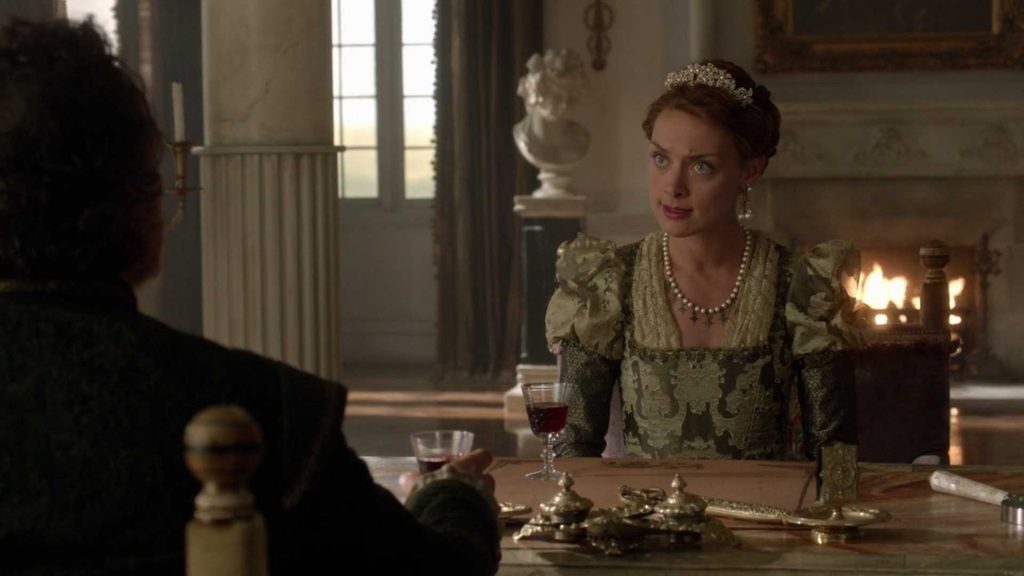 Back in England,  Elizabeth is dealing with the ever seeping dislike of the Vatican and Spain. Worried that her catholic lord’s will take up the cause against her she plans to send her army to rough them up a little. Gideon instead suggests she woes them.

At court a catholic lord speaks highly of Henry viii and thinks back on a time when ‘men were men and kings were kings’. The lord speaks directly to Gideon and seems to go out of his way to ignore the Queen in front of him. He forgets Elizabeth is no puppet, no man controls her strings. 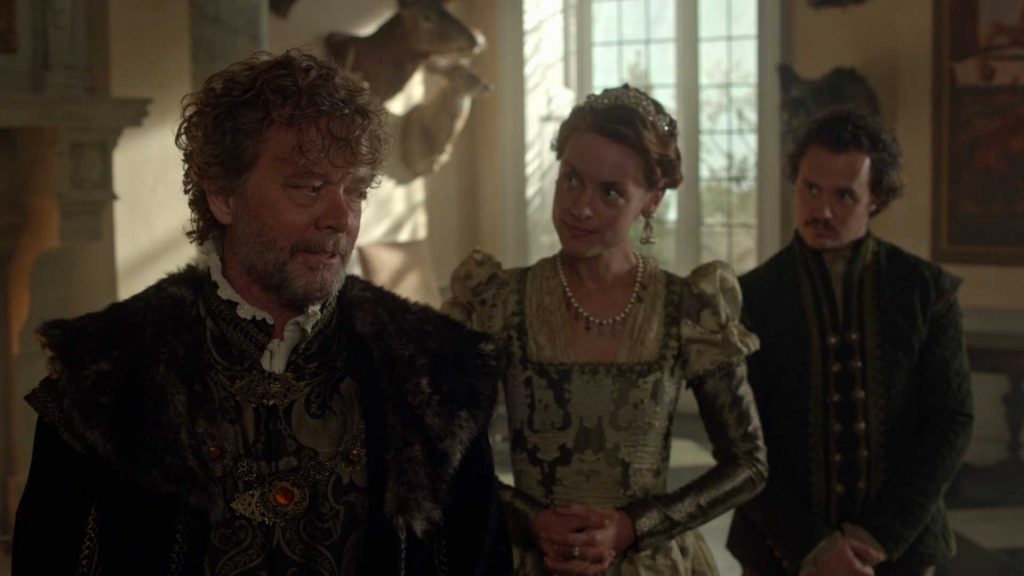 Honestly this scene is gold though for Rachel’s faces.

Unimpressed with her lord’s attitude towards her sex Elizabeth decides to show those who doubt her, she is no ordinary woman, she is a Tudor Queen(anyone who doubts how much of a badass Elizabeth was I’d recommend you read Alison Weir’s Elizabeth, the Queen)

In the woods with her rather misogynistic catholic lord’s it is a miracle Elizabeth didn’t end up shooting any of them.

Winning their loyalty with a well aimed shot and a nice little payload for wood to build new naval ships, Elizabeth nicely deals with loosening the grip the Vatican has on her catholic nobles. 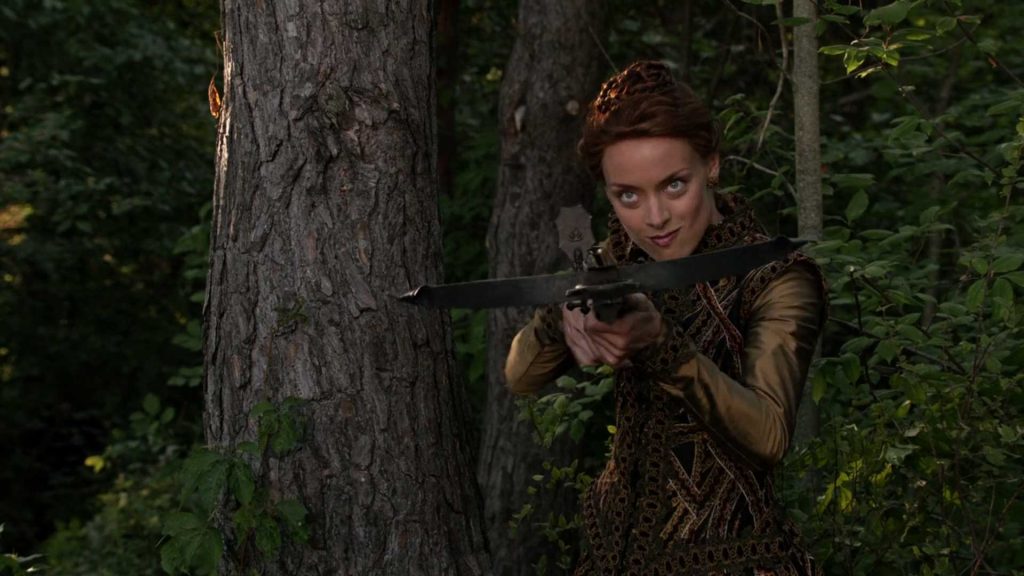 Side note, the scene where all the nobles rise to pledge loyalty and Elizabeth stays seated, historically gets a high five.

Gideons’ no show at the hunt is explained by the worsening health of his daughter. His downright disrespectful behaviour towards his queen may be understandable but unwise.

Will Leith be able to prevent the marriage becoming legal?

Will Mary marry Darnley despite her doubts?

And will Elizabeth finally show some more strength?

Current running total for the donation to the Nyantende Foundation is $25.