In France Charles continues to behave in an aggressive manner whilst Prince Henri continues to plot his brothers downfall.

Charles risks the wrath of England when he confiscates English ships.  Narcisse must now negotiate with England to avoid military retaliation.Gideon is sent to France to negotiate on England’s behalf. France wants England to buy back her ships. To sweeten the deal me avoid conflict, Narcisse offers all the inventory back.

This offer displeases Henri who wishes to keep the cargo on behalf of Spain. The ship’s had been carrying a key ingredient to make gunpowder.

When Narcisse breaks the news to Gideon that France has impounded the British cargo neither man is impressed but Narcisse drops a not so subtle hint that Gideon should negotiate direct with Charles.

Charles is furious with Henri, keeping the English cargo and palming it off to Spain is a ploy to set England and France against each other while Henri, Leesa and Spain gain.

Gideon is sent home to England with all he came for.

Henri continues to plot at court, he informs Nicole that Narcisse is using her. Refusing to believe him, Henri suggests they hide in Narcisse’s chamber so that she can see his reaction to her gift.

Narcisse is unimpressed with the gift and Nicole is clearly upset. Things get worse when Nicole and Henri, trapped in their hiding place witness Narcisse and Catherine have sex. Mind bleach anyone? That might teach Henri to not go looking for trouble. 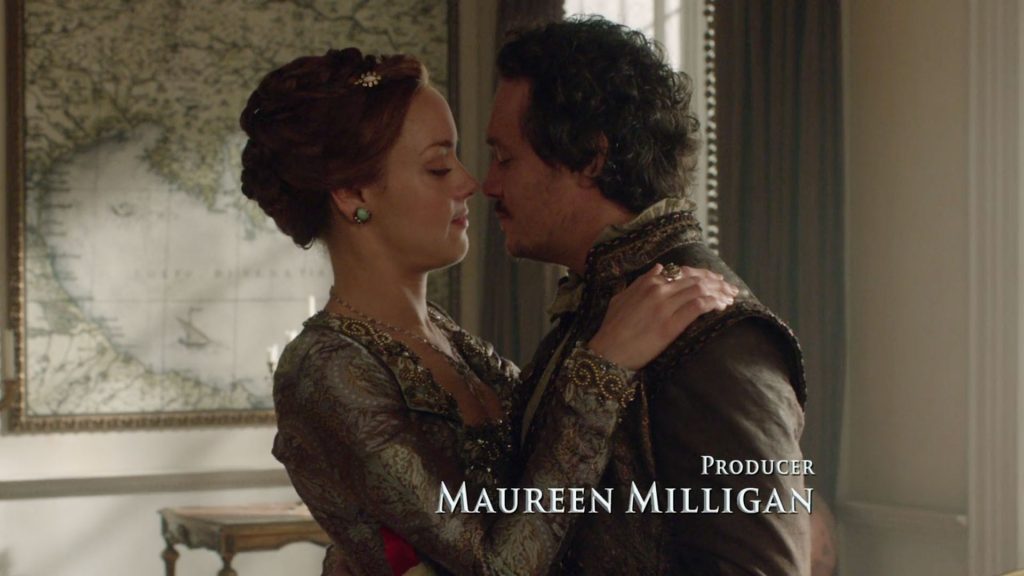 Before leaving for France Elizabeth and Gideon steal a moment to be together. Fearing they will miss each other whilst he is gone, Gideon suggests Elizabeth write down her thoughts whilst he is in France. Yes ladies and gentlemen, the Queen of England writes dirty, dirty smut. 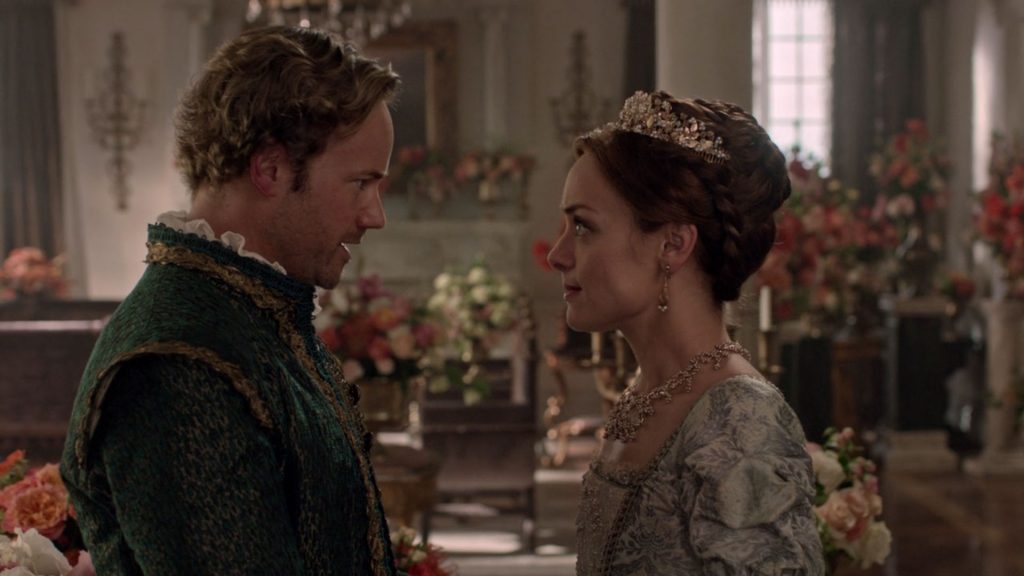 After enticing Elizabeth to bed the Archduke admits he knows her words are not about him but Gideon. He can see the way she looks and acts differently around her advisor.

Elizabeth is put out that he chose not to tell her this before sleeping with her but both of them know this marriage benefits them both.

Archduke Ferdinand still wishes to marry the Queen on the understanding that Gideon must leave court. The Queen’s lover can not remain in her life. 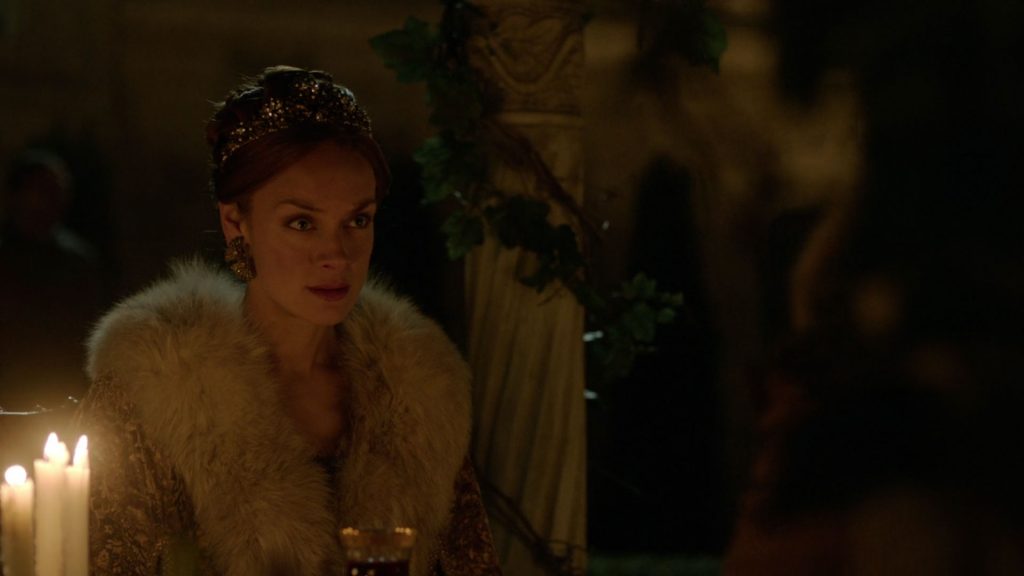 In Scotland Darnley continues to earn his title of King Dickhead. He has been bribing the privy council behind Mary’s back. With the privy council on side he intends to force them to give him the crown matrimonial.

Surrounded by all the movers and shakers of Scottish court Mary publicly announces her pregnancy, catching Darnley off guard he is forced to publicly claim the paternity of the child.

Knox is irate and upset with Darnley’s declaration. With his claiming the child as heir it puts a big wedge in their plans to usurp Mary’s throne.

Their conversation unsettles Darnley, yes he is an asshole but he only wants the crown matrimonial. Darnley seeks power but Knox despises Mary and is willing to go to any lengths to remove her from power, even if it means her death.

Mary orders an investigation into all her privy councillors and uncovers that one has been stealing from the crown and his fellow council members.

This information may be what Mary needs to keep the council at bay and Darnley away from the power he seeks.

After Mary confronts the privy councillor over his theft Rizzio had a personal matter to confront the man over. Both the council member​ and Rizzio have visited a certain person and Rizzio threatens to out him as homosexual. Outing the man would out Rizzio himself but in sad foreshadowing Rizzio is clear, if it means protecting Mary then he is willing to die.

As they continue to scheme against Mary, Knox and Darnley plot to have Mary charged with adultery.

When they believe Bothwell is in private chambers with Mary,  Darnley along with the privy council burst into Mary’s chamber.

With Bothwell nowhere in sight the men instead set their sights in Rizzio. As Darnley holds his pregnant wife back the men brutally murder Rizzio.

Mary is devastated, her friend is dead and she is now trapped inside her own castle with men who seek to take her crown. Feigning an issue with the baby Mary is taken sick and Darnley rushes to her side. In a weird twist of fate Darnley helps Mary escape.

On horseback in the forest Darnley leaves Mary alone. He fears for his life he rides with her to where Bothwell and his men are waiting.

When Mary finally arrives she must break the news if Rizzio’s death before rounding up all the men. She is Mary, Queen of Scots and when morning comes they will ride on Edinburgh, reclaim her castle and seek vengeance on those who so cruelly killed her friend and plotted against her crown and life.